This week for the One Room Challenge update (where I’m working on our vegetable garden) I have some tips for growing herbs from Isabelle at Paradise Herbs.
Isabelle and her partner Rob, moved from Switzerland to BC last year to start an herb farm. They also have animals, fruit trees and grow vegetables while using regenerative farming practices.

Herbs are so easy to grow and so expensive to buy, and they add so much flavor to a meal. I think a small balcony herb garden could benefit a lot of people.

Herb tips
– If you have a balcony and limited space, I would take 2 window boxes to plant two sets of herbs. Parsley, marjoram, savory and basil for example all take rich soil and lots of sun, so any normal potting soil will do and plant them in the sun. Some small rocks or sand in the bottom would help with drainage though. All of those herbs, except the parsley, are annual and will need to be planted again next year if you leave the box outside. However, if you bring the box inside over the winter, you’ll have parsley at least all winter too.
In the other box, I’d put perennial herbs that like good drainage and put half sand and half soil in the box. Perennial herbs that like good drainage are rosemary, thyme, lemon thyme, sage and oregano. This box should be brought inside at least its first winter (if growing from seed) and especially if you want to enjoy these herbs in the winter.
– You can grow herbs from seed but they require sometime up to 3 weeks to germinate, so do not hesitate to plant them any season inside and expect 80% germination with most herb seeds (50% with rosemary). Within a year though, your rosemary will be 20cm high even from seed.
– Lastly, if you want mint or lemon balm, plant them in a third box alone, otherwise they will take over all the other herbs in the box.
Perennial Herbs:
More behind the scenes from the long farming days and what Paradise Herbs is working on can be found on Instagram below:

Fresh herbs make simple food feel fancy and even if you don’t have a lot of space, they can be planted in pots to enjoy as Isabelle explained.

Since we’re all spending more time at home cooking, here’s a simple recipe based on Whitewater Cooks ‘Cool Sesame Miso Noodle Salad‘. I love Whitewater Cooks and their recipes that are healthy, often plant based and uncomplicated to make but so delicious. They’re also based in BC near Nelson and have several cookbooks available.

I’m not a food blogger – mealtime is too chaotic at our house to be taking decent photos but this recipe is so simple, summery & satisfying that I had to share. I modified it to only use basic pantry staples that are livened up with the addition of fresh herbs & leafy greens. 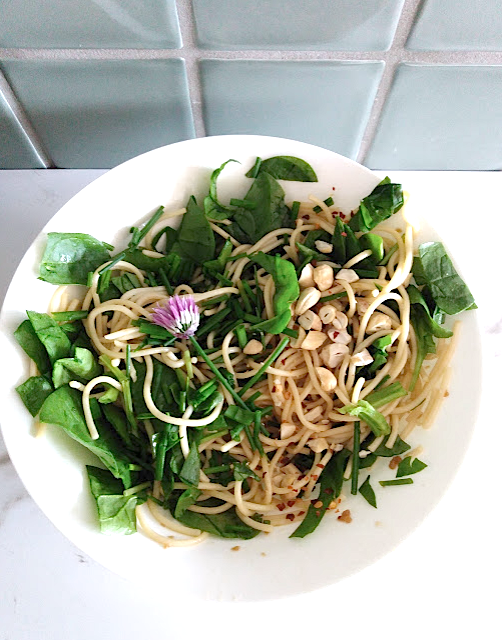 Method: Mix dressing ingredients and add to cooked & cooled spaghetti noodles- (run them under cold water) before serving. Toss with fresh green vegetables and chives. Add chopped nuts and protein as desired. Keep the extra dressing in the fridge and you’ll be ready for another quick meal. 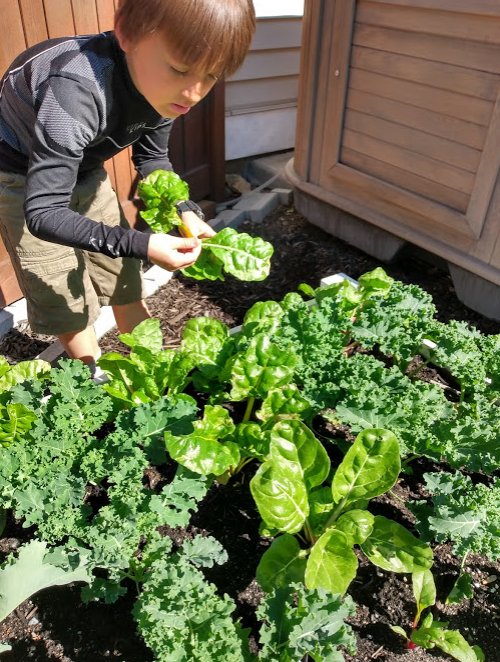 Right now in our garden everything is growing and the kids are enjoying picking and sometimes eating the leafy greens.

My older son loves going out to pick our salad greens and loading up this colander before mealtime. Now of course I wish he would eat them! 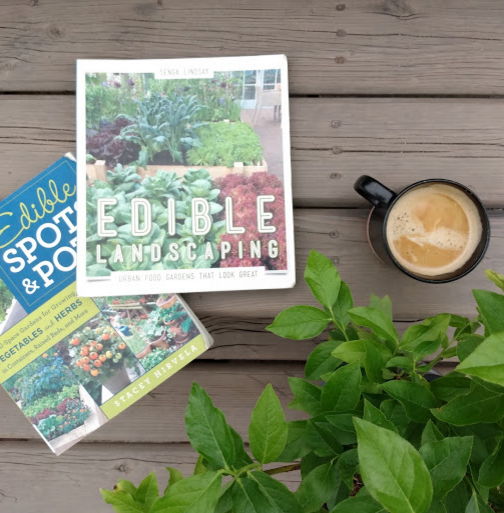 These are a couple of books that I have found to be useful resources. Edible Landscaping by Senga Lindsay has lots of different edible garden styles that look good and covers everything from rooftop gardens to potager to urban gardening ideas. Edible Spots & Pots by Stacey Hirvela has information about planting combinations, how to harvest herbs and which choices make the most sense to plant.

While my One Room Challenge is about the vegetable garden area I am also going to plant these trees and grasses. This size of pine was much easier to bring in the car than the 6 foot cedars I planted to create a hedge at our last house.
I figure that this is the ideal time to plant trees since there will be no vacation plans so the trees can be watered daily to become established.
To see what everyone else is up to for the One Room Challenge click here.

This week I’m sharing some vegetable garden progress. I’ve been dabbling in growing vegetables and flowers for a few years and every summer I try to learn something new, however my knowledge is still very basic. 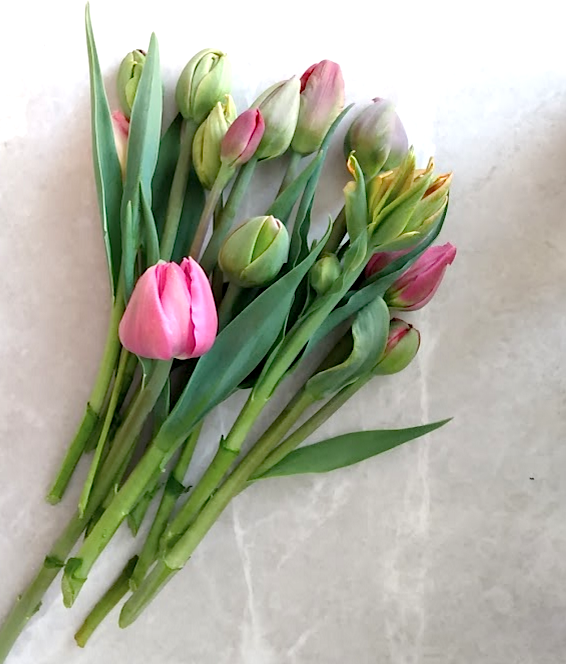 These are some of the doube early and parrot tulips that I planted in the fall. I filled one planter bed with about 100 tulips bulbs plus I tried adding some garlic too. In the springtime I love to be able to cut flowers from the garden before planting vegetables.

One thing I learned the hard way before is to leave the tulip leaves until they turn yellow. As tempting as it is to tidy up the leaves they are needed to feed the bulb for the next year, otherwise there will be no flowers the next year.

Now that the tulips are almost done I’ve added some spinach where there were some gaps and I direct sowed some kale seeds as well.

Spinach is supposed to do better in cooler weather so I put some here in one corner of the box with the tulips (I still have to paint this side of the planter).

This is about one week after putting the seeds directly into the soil. I figure I have the seeds left and the space so we’ll see what happens. Growing from seed was a first this year and while it was exciting to watch them grow throughout March and April indoors, they haven’t been very successful.

I ended up turning to store bought these seedlings to get a jump start on the limited growing season in Canada. I definitely have a new appreciation for farmers and growers. 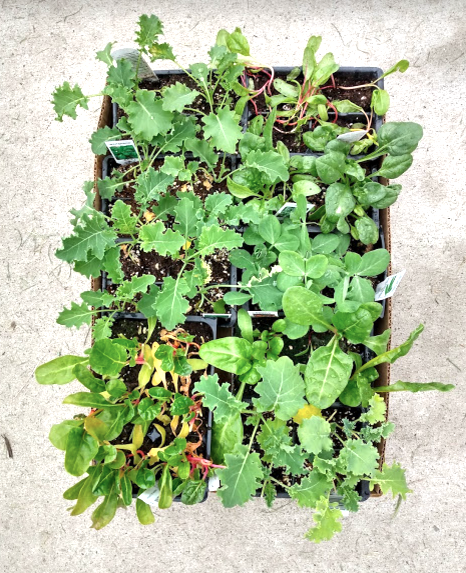 These are the seedlings from the nursery first planted.

Now the swiss chard and kale are filling in. I painted these raised beds with dirt in them so it wasn’t the best job but it’s better than they were before.

Also these chives came back from last year, somethingI didn’t know they did. This kale made it through winter and now we’re hoping that these flowers will turn to seed. 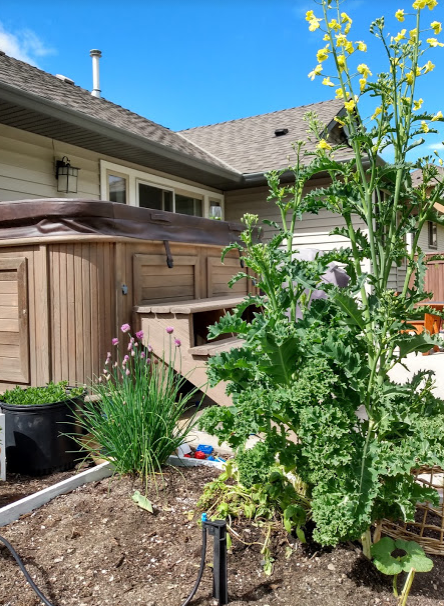 A reminder of what the yard looked like last summer. 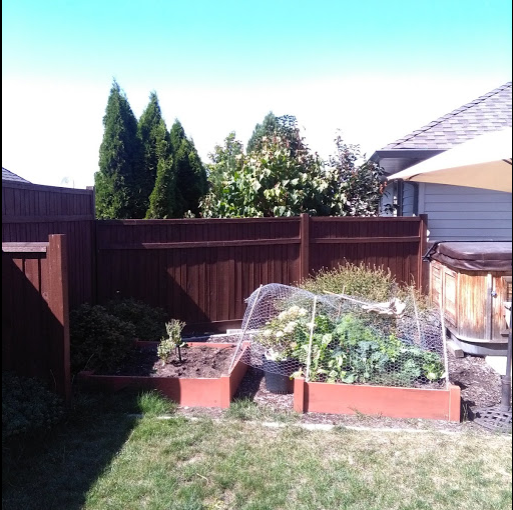 Back in the early days at our previous home I would plant kale, swiss chard and brussel sprouts in the gaps between the limelight hydrangeas and cedar hedge that I planted. The trees were small enough that there were still big enough gaps between them to let enough sun in. 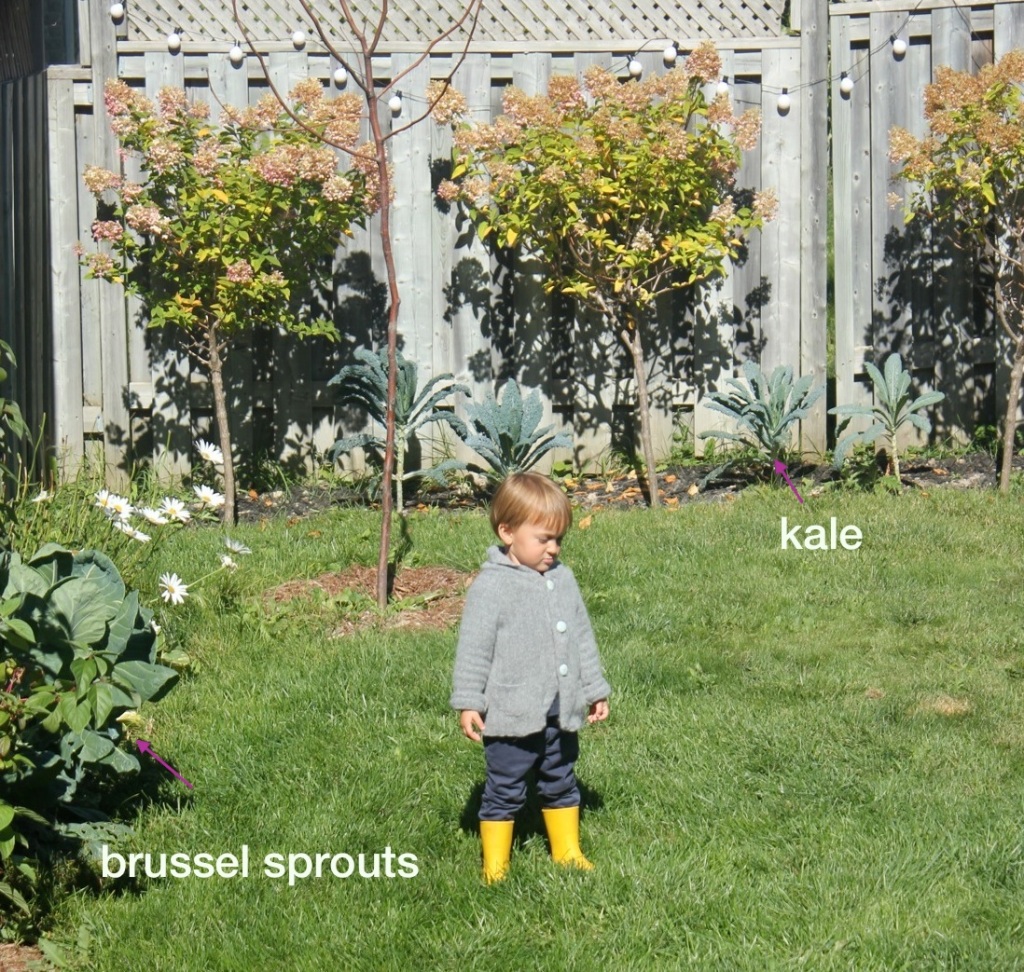 We also had success with planting zucchini in random spots in the yard too…like this giant one below!

So if you have an outdoor space but don’t have planters maybe there’s somewhere you could plant directly in the ground. Swiss chard and kale are so easy.

Next week I will have some advice from my friend Isabelle of Paradise Herbs here to give some tips for growing. She has recently set up a farm in the Slocan Valley BC where they promote self-sufficient living and sell culinary & medicinal herbs.

Last summer Isabelle was visiting for a girls weekend here and suggested getting the overgrown mint out of the raised bed in our yard. That idea prompted me to move it into my front hanging baskets where it can no longer spread out of control – plus it means staying home and using what we already have. 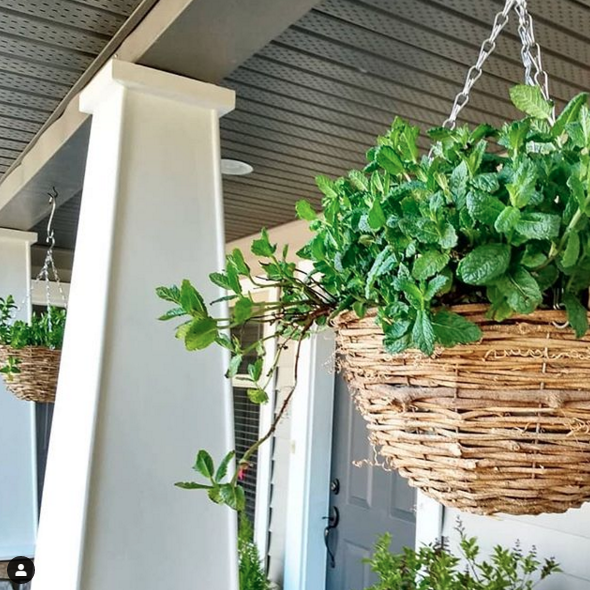 To see what everyone else has been working on for the One Room Challenge click here.